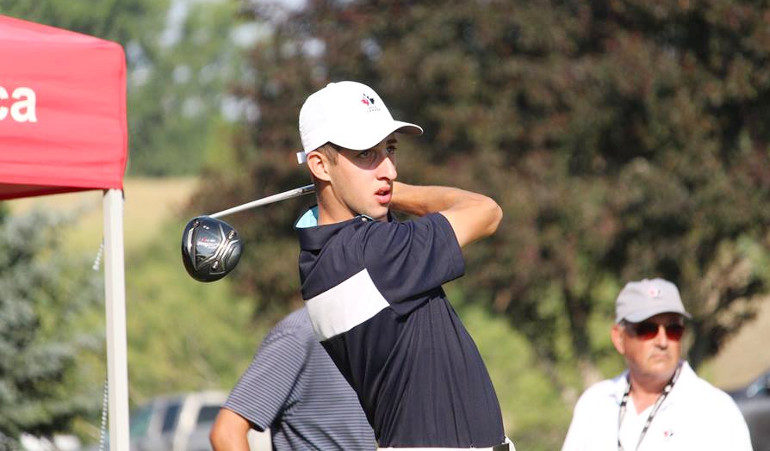 Colby Friedrich is happy with the way he performed at the Canadian Junior Boys Championship this week.

The 16-year-old was the lone Saskatchewan golfer to make the cut at the Medicine Hat Golf and Country Club based tournament. The Battleford product shot 26-over par through four rounds, that left him in 71st place. Friedrich said overall the event was a great endeavor.

After carding a 77, 6-over par on day one Friedrich knew he had to be better during round two to make the cut. He played well posting a 73, just below the line which allowed him to play two more rounds. He said his nerves were shot waiting for the competitors to finish the round.

“After the round I couldn’t stop looking at my phone seeing how far I was moving up the leaderboard. I was pretty nervous,” Friedrich said.

The 72-hole event, not including practice rounds piled up for Friedrich he admitted. He said the biggest learning curve was the toll the competition took on his body. Several days in Medicine Hat the weather hovered in the mid-30-degree Celsius range. He said his body couldn’t get enough water.

“It takes it’s toll, especially round two when I knew I had to go out and post a good score. I did but, in the heat, it was a grind, some of the hottest weather I’ve ever played in,” he said.

The championship does include a “juvenile” age category that is for golfers under 17 years of age. Friedrich was 18th within his age group. Friedrich shared the experience with Josh Nagy, Bradley Moser, Connor Scissons, Steven Duchscher, and Cole Obrigewitsch. He said he hopes to take what he learned this year into another national championship next year.

“It was awesome, just spending time with the guys. It was a great experience, meeting a couple new guys. I was able to show myself what I need to work on and hopefully I can come back next year, make the cut and play better the last two days,” he said.

Friedrich will take a couple weeks off before the Junior Lobstick in Waskesiu. He will finish the competitive season at the Maple Leaf Junior Tour Championship at the Elmwood Golf Club in Swift Current.